This weekend get ready for some dhamakedar entertainment as Zee Anmol Cinema – Aapki Family Ka Cinema Hall brings to you the action-packed blockbuster film ‘2.0’. Directed by S. Shankar, the sequel of the popular 2010 sci-fi thriller ‘Robot’, takes the entertainment a notch higher with never seen before action sequences, mind blowing special effects, spectacular star cast and a bigger plot twist that will keep you at the edge of your seats. Touted as the ultimate action entertainer, 2.0 features Thalaiva Rajnikanth reprising the roles of Vaseegaran and Chitti, alongside Bollywood’s ultimate Khiladi, Akshay Kumar who essays the role of the antagonist ‘Paakshi Rajan’. This movie is the first film to bring the two megastars together in one frame. The larger than life film follows the conflict between Chitti and Pakshi Rajan, a former ornithologist who seeks vengeance upon cell phone users to prevent avian population decline. So, this Sunday, 7 pm be ready to witness the ultimate battle between the good and evil with the premiere of ‘2.0’.

The storyline revolves around a looming threat in the city in the form of an evil birdman ‘Paakshi Raja’ who wreaks vengeance on mankind for harming birds with mobile phone radiation. With revenge on his mind, he destroys mobile towers and phones as he wants vigilante justice against the people who control these towers. As this chaos and fear envelops the city and things start to go out of hand, the government calls Dr. Vaseegaran to sort this problem by bringing back Chitti, the dismantled advanced robot to stop the nightmarish rampage of the birdman. Will Chitti and Vaseegaran succeed in saving the city from ‘Paakshi Raja’?

To find out, witness the ultimate battle between the good and evil this 15th November with the premiere of 2.0 at 7 pm only on Zee Anmol Cinema! 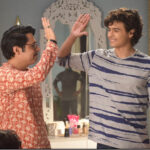